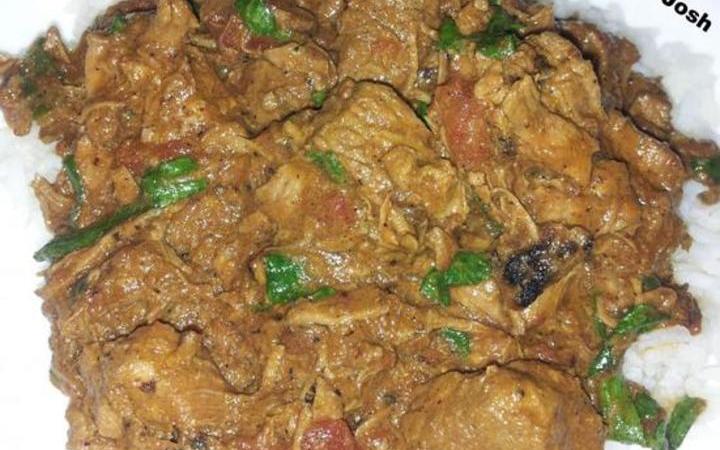 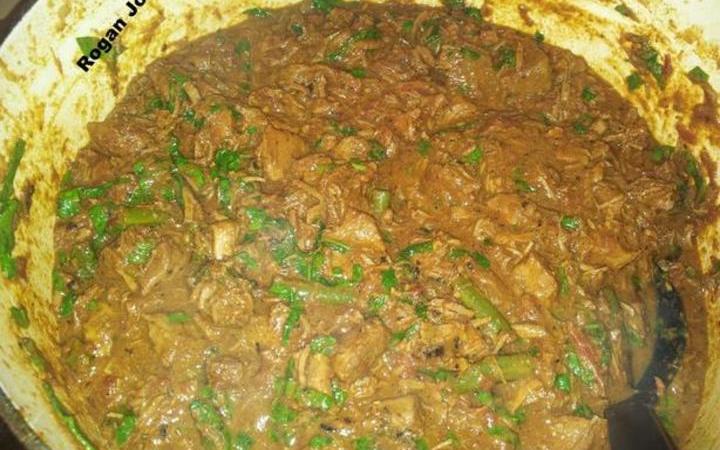 "DH found this recipe on a blog site and asked me to save and will hopefully be making in the next day or so. Please note I made the following changes from the original recipe - the original finely chopped the onion, they used 3/4 can of whole plum tomatoes and chopped but did not specify size of can, they used a generous handful of coriander while I used spinach, they used 2 dessertspoons of natural yoghurt and I used 3 tablespoons of Greek yoghurt. I boned a 1.3 kilo leg of lamb and got 725 grams of lean meat and I also threw the shank into the pot. I served over rice with naan bread and did not make the salad. Also the original poster said to cook for 2 hours but I found it needed 3 hours to get to the point it was thick and glossy and there is a lot of gravy for the rice. Please note I have not allowed time for boning the lamb and cutting it up but it took me 20 minutes. 19th January - made again using 2 legs of lamb (which I deboned) got just under 1.8K of meat and used double recipe and it took 4 hours to cook, at a slow burble or slow simmer, and added lamb shanks as well and there was no meat left on them after the cooking time (next time I will also put the leg bone in as there was still some meat there [still haven't got my boning skills that fine as not to leave some meat :lol:] and I think the marrow from the bones help to thicken the sauce and add flavour as well), this time I also added beans in the last half hour of cooking and shredded spinach just before serving and the DH also suggested potatoes being put in when the onions are cooked but I vetoed that for us for if I serve with rice that is too much carb for me as a diabetic unless I pick the potatoes out of my portion but something to keep in mind for those that do not have that problem (I usually have a small tomato, cucumber and lettuce salad on the side and I do serve with naan bread)."

This is a no fuss method - involving just one pot and your skill and patience as a stirrer of a wooden spoon!

First pour a couple of tablespoons of vegetable oil into the pot and heat on high until very hot and then throw in the finely chopped onions and stir fry until the pieces start to go soft and translucent and then add the garlic and ginger and keep stir frying (they used frozen chunks which they had defrosted).

Then add all the quantities of ground spices and keep frying, the mixture should be dryish - and this is called "dry frying" or "pot roasting", fry for a few minutes until the heavenly aroma fills up your entire house and then add the chunks of fresh leg of lamb and keep stir frying.

You should stir fry for around 5 minutes on highish heat until the meat has fully browned and then throw in the tinned tomatoes.

Stir it all about and let it cook for a few minutes before adding a couple of large dollops of plain natural yoghurt (I would use greek yoghurt), stir it all in and then put the flame on high to bring it to a boil.

Then put the lid on and immediately transfer to the lowest possible flame burner and then go off and do something else of half and hour and then come back after the half hour and take the lid off and give it a stir and then put the lid back on and let it simmer for another half hour and repeat this for around two and half hours, checking every half hour and you will notice that the consistency of the mixture is a bit thicker and the colour is a bit redder/browner. Mine needed 3 to 3 1/2 hours but my flame was really low and it was only just simmering, so I think the burble stage/light simmer would be better.

At this point it is done, taste it in order to see if any more salt or chillie powder needs adding and make sure that lamb pieces are tender and not chewy.

Then sprinkle on the spinach and stir it in and let it rest with the lid on for 5 minutes and it is ready to serve.

This dish is best served in bowls with naan and or rice accompaniment (or both) and a side salad of chunky cucumber, tomato, onion and carrot with a dash of lemon or vinegar.

NOTE - please read intro and look at the changes, they may help you and also feel free to add other vegies to make as a one pot meal and though I have only added beans which are not mentioned in the ingredient list but have in the intro - so please read.

UPDATE - I have doubled this recipe with success though needed longer cooking time and have just quadrupled it (I had 3 legs of lamb and got 3.3 k of meat but instead at step 6 I put it in a 160C fan forced oven and cooked for nearly 5 1/2 hours (I also added the shanks and the bones [they still had some meat on them], which I removed at the 4 hour mark and pulled the meat off and chopped and added back into the pot) but in future for my pot I will not more than triple as I did have some flow over. 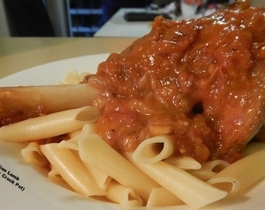 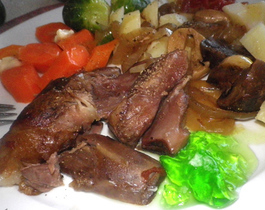 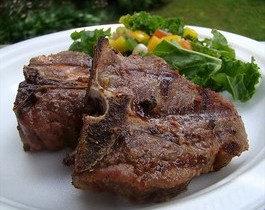 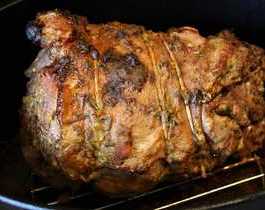 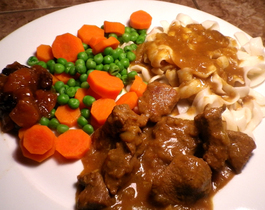 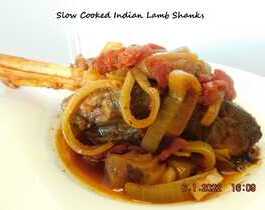